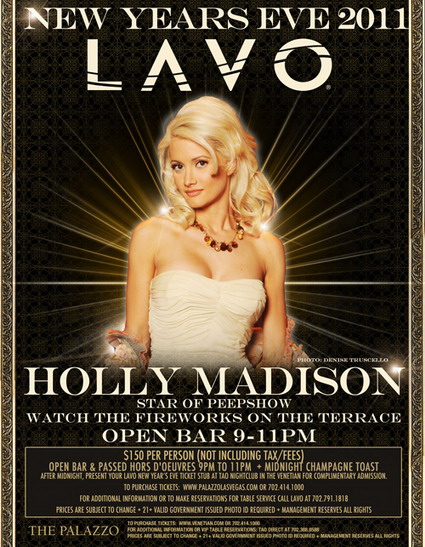 What’s New Year’s Eve in Vegas without some late night partying, drinking and dancing? Well it’s not New Year’s Eve at all! In fact it’s not even Vegas. In a city where partying comes standard with every visit, special occasions like New Year’s Eve have become full force, no holds barred, out of this world events. And when you couple that with some of the Strip’s hottest nightclubs, you have a New Year’s Eve not to forget…or remember!

This year Lavo in the Palazzo is one of those nightclubs. Ring in 2011 in Lavo’s intimate 4,500 square foot lounge. Marvel at the glazed tile arches that open to a dance floor under a domed ceiling and take in the Moroccan elements that make this club so unique from others on the Strip. Then it’s time to party! With the Lavo New Year’s Eve admission guests can grab a drink or two at the open bar, taste luxury with free hors d’oeuvres from 9-11 p.m., indulge in a champagne toast at midnight and receive entry into the famous TAO nightclub after midnight. Plus, watch the sky light up from Lavo’s terrace as fireworks dance across the night saying goodbye to 2010 and hello to 2011!

New Year’s in Vegas will never be as exciting as it will be this year at Lavo! But don’t wait until the 31st to book your ticket, with so much excitement, luxury and pure partying at Lavo, these tickets will sell out soon! S make this year a happy one at Lavo’s New Year’s Eve party!