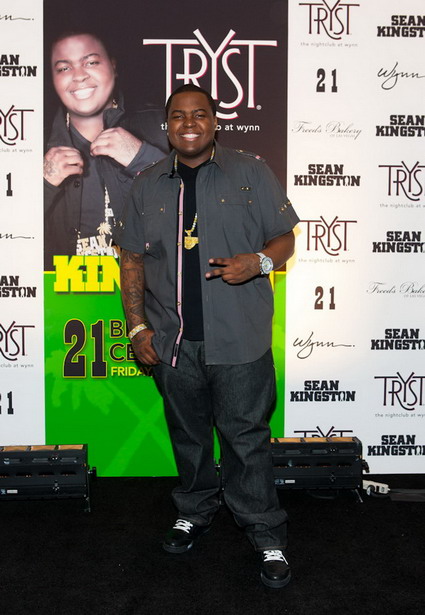 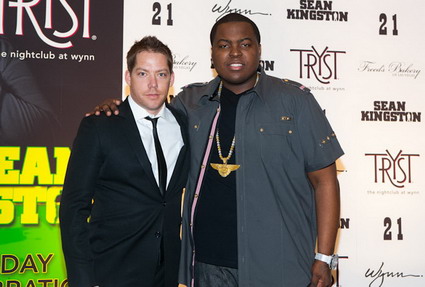 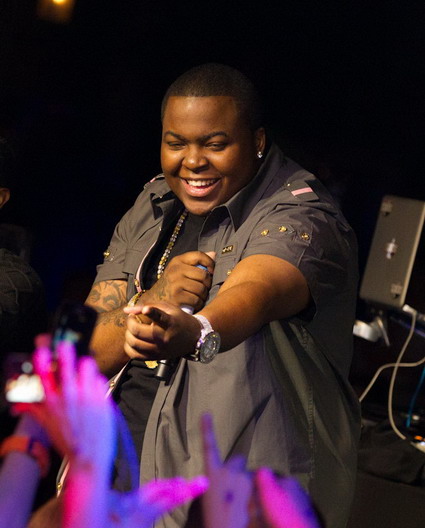 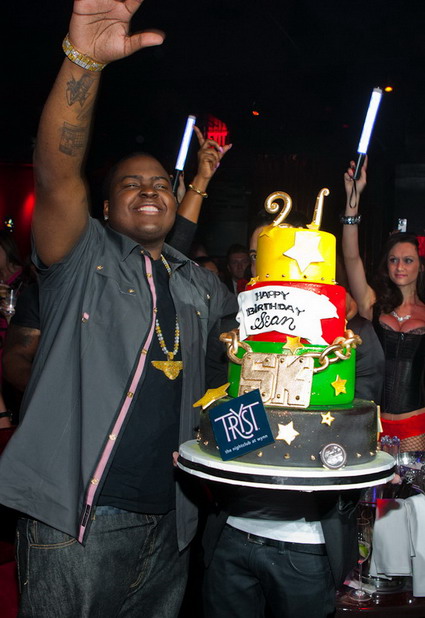 Photos by © Erik Kabik/ RETNA/ www.erikkabik.com
Superstar singer Sean Kingston reveled in his 21st birthday party at Tryst Nightclub with an entourage of friends and family. A much slimmer Kingston walked the carpet, telling reporters he is down 35 pounds thanks to an intense workout plan. Blinged out for the celebration, he was sporting an impeccable diamond-encrusted Bentley logo gold chain, a dazzling platinum diamond watch, a gold diamond bracelet, and multiple carat diamond earrings. He told reporters that he was very excited to finally party inside a Las Vegas nightclub but also kept much of the focus of the evening on his mother, Janice Turner, who beamed in pride next to her son.

The admired performer was escorted to an exclusive VIP table inside the Wynn Las Vegas hot spot, sitting raised over the dance floor overlooking his fans below. With champagne the drink of choice for the evening, Sean raised his glass to crowd and celebrated cheers with his closest friends. The Tryst staff presented Sean with an amazing four tier birthday cake by Freed’s Bakery of Las Vegas, covered in the Jamaican colors and adorned with its own bling, an edible oversized gold chain featuring Sean’s logo draped over and a gold 21 sitting atop the creation. DJ Spider led clubgoers in serenading the young star with “Happy Birthday” while Kingston smiled from ear to ear.

Shortly after, he gave the crowd a gift of their own, performing three of his hit songs on stage with DJ Spider, DJ Hype King and Andrew Chin on stage. He opened the performance with “Take You There” but stopped the music a few bars in to yell to the crowd, “I’m 21, Vegas!”, bringing an eruption of screams from onlookers and chants of “Sean Kingston” over and over. The dance floor was packed with anticipation of the performance, a sea of hands raised high above to the crowd. Kingston spoke of his love for Nicki Minaj before breaking into their collaboration “Letting Go (Dutty Love)”, flanked by the gorgeous Tryst go-go dancers and set in front of a breathtaking backdrop in the venue’s infamous 90 ft waterfall. He told the crowd “I just turned 21, and I feel so blessed. I have to give a shout out to Mama Kingston in VIP. I love you!” He closed the set with his hit song “Fire Burning” causing an explosion of excitement on the dance floor with girls trying to sit on their boyfriend’s shoulders for a better view and everyone inching closer to the stage for a closer glimpse.

Before finishing the intimate performance, Kingston told the audience “It’s not only my birthday… Someone else out there is celebrating too! There’s someone very special I want to bring to the stage.” Groups of female clubgoers celebrating their own birthday began to scream in hopes that he was speaking of them, but Sean asked his mother to come to the stage instead, as she will celebrate her birthday on Monday, Valentine’s Day. Janice glowed in delight before showing off her dance moves, grooving on the stage to the Waka Flocka Flames hit song “No Hands” with the entire group. The Tryst staff then brought out a second gold cake with red roses specially for his mother as he asked the crowd scream “Happy Birthday!” three times for her. They danced on stage for multiple songs before heading back to their VIP table and reveling in the celebration into the early hours of the morning.

At 5:30 am, Kingston sent a tweet out to his nearly one million followers saying, “WHAT AN AMAZING NITE!!!!!!!!….. THIS VEGAS PARTY WAS THE BEST EVER WOWOWOWOW.. I had too much fun.. We was swaggin tha whole night.. HEAVY!”