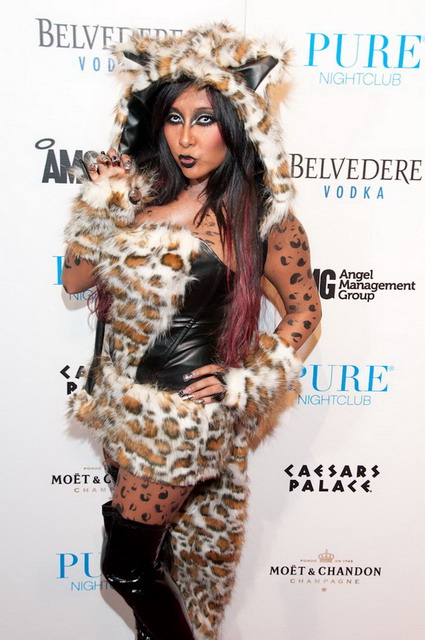 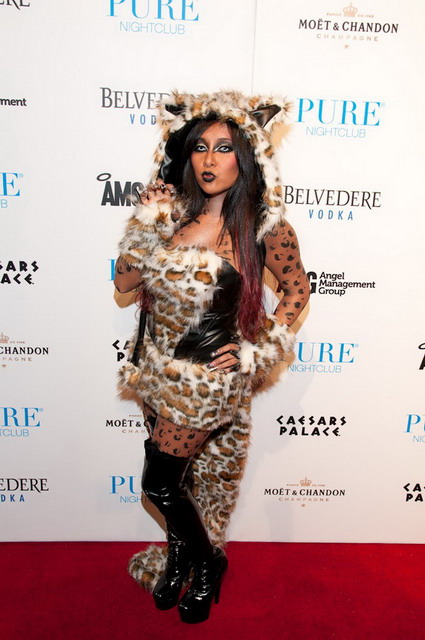 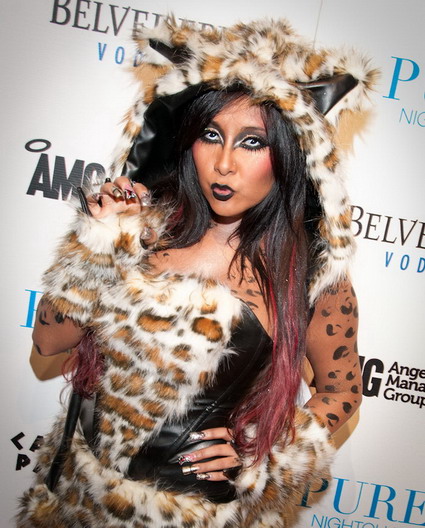 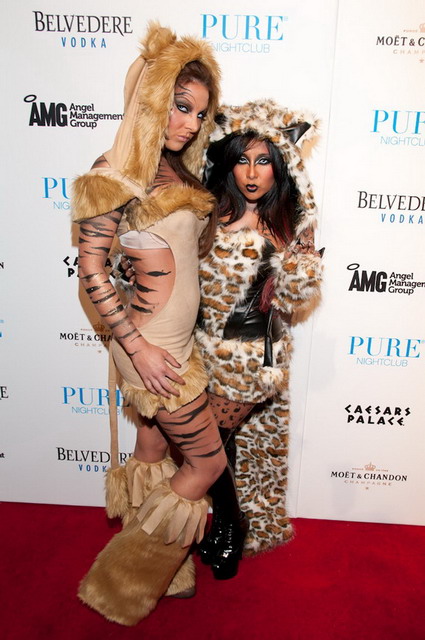 Photos by © Lisa Wright/ RETNA/ retnalv.com
Last night, everyone’s favorite ‘Jersey Shore’ star Nicole “Snooki” Polizzi took Sin City by storm as she hosted a spine-chilling Halloween bash at PURE Nightclub inside Caesars Palace. The petite guidette along with her best friend Caitlin Ryder aka “Ryder” arrived at the mega-club just before midnight looking feisty and fierce in their feline costumes. Polizzi was dressed as a sexy leopard decked out head-to-toe in fur complete with paws and tail. In addition, the energetic brunette was covered in body paint and completed the look with a set of cat eye contact lenses. In full Halloween spirit, the 23-year-old MTV reality darling growled at the cameras as she posed for photos on the red carpet.

Known for drawinga crowd wherever she goes, Polizzi was instantaneously surrounded by fans as she was being escorted inside the nightclub. Hundreds of admirers screamed and shouted “I Love You Snooki” as she made her through the venue and to her VIP table. Once she settled into her area, Polizzi rushed to the front of the stage and immediately became the center of attention. Getting the party started off right, she pumped up the crowd by shaking her tail (literally) and throwinglarge lighted foam batons into the sea of clubgoers. She got on the mic andsaid, “thank you everyone for coming out tonight to my favorite club in Vegas!”

Later in the evening, Polizzi played her role as celebrity guest judge in search for the “Sexiest Vixen.” One-by-one the gorgeous contestants strutted their way to the main stage as they showed off their bewitching costumes for Polizzi. The competition was close as she thought all the girls looked hot and couldn’t decide, but with help from the crowd the fist pumping party girl picked “Sexy Elvis” as the first place winner, followed by the “Black Angel” in second and the “Three Musketeers” in third place.

After judging the contest, Polizzi continued to party with fans as she spent the rest of the evening sipping on cocktails and dancing.